pRevTet-On is a retroviral vector expressing the reverse tetracycline-controlled transactivator (rtTA) from the CMV promoter. This vector is derived from pLNCX, a retroviral vector created using elements of Moloney murine leukemia virus (MoMuLV) and Moloney murine sarcoma virus (MoMuSV) as described (1). rtTA is a fusion of amino acids 1–207 of the reverse tet repressor (rTetR) and the negatively charged C-terminal activation domain (130 amino acids) of the VP16 protein of Herpes Simplex Virus. rTetR was derived from TetR and differs by four point mutations, which are responsible for its opposite response to doxycycline. The 5' viral LTR controls expression of the transcript that contains Ψ+ (the extended viral packaging signal) and the neomycin resistance gene (Neor) for antibiotic selection in mammalian cells. rtTA is derived from vectors described previously (2–4). pRevTet-On also includes the E. coli Ampr gene for antibiotic selection in bacteria.

pRevTet-On can be used to establish stable Tet-On cell lines via retrovirus-mediated gene transfer (5). Retroviral gene transfer allows the highly efficient transduction of virtually all dividing cell types. The RevTet Systems are also suitable for establishing transgenic animals. In combination with the pRev-TRE retroviral expression vector, a gene of interest can be inducibly expressed at high levels in response to varying concentrations of the tetracycline derivative doxycycline (Dox). rtTA binds to the Tet-response element (TRE), thus activating transcription in the presence of Dox. The response of rtTA to Dox is thus opposite to the response of tTA. As Dox is removed from the culture medium, transcription from the inducible promoter is turned off in a highly dose-dependent manner. pRevTet-On lacks the viral genes gag, pol, and env, which are supplied by the packaging cell line. It can be transfected into a high titer packaging cell line and thereby mediate production of infectious, replication-incompetent retroviral particles (1, 6–7).The transcript produced by the pRevTet-On construct is recognized by the viral structural proteins expressed in a packaging cell line and packaged into infectious retroviral particles. Because the RNA transcript packaged in these particles does not contain the viral genes, it cannot replicate in the target cells that it infects.

The level of induction in cell populations infected with this vector depends on the efficiency of infection, the site of integration, and the titer of the virus. Viral supernatants with titers >105 cfu/ml should be produced to achieve high-level induction. 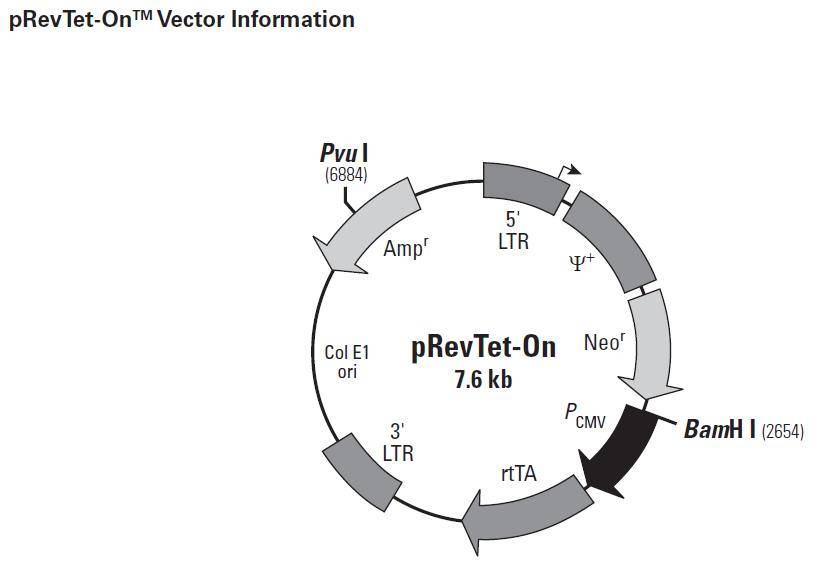